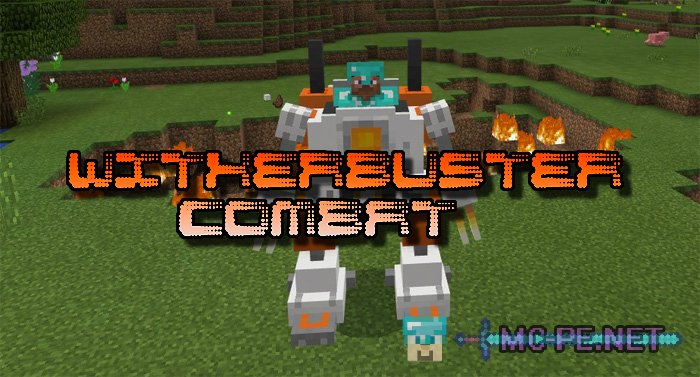 Witherbuster Combat introduces in the familiar world of Minecraft the best combat gear for an epic battle against the boss of Ischitella and other hostile monsters. The mechanical design is equipped with a seat, which should be in the player. This equipment has different abilities that are meant for killing the enemy. In this equipment do not have to fight with bosses, You can safely attack all creatures that attack You.
Next you added a new and improved version of the mechanical suit in black color. Experience the new!

How to install Witherbuster Combat on Minecraft PE

So they got to the Minecraft – meet the Teletubbies. They spawn as mobs anywhere in the world. Attack the player will not – unless, of course, You will not get to fight first. Falling just a fun loot, and to tame them with cookies or stewed mushrooms.
In this addon there are other characters in the world of Teletubbies, and still have their infected versions – these are aggressive monsters, and loot from them more interesting. With a tink-tank, for example, falls from nine to twenty diamonds!

The amendment introduces five gorgeous bosses in our favorite Minecraft Pocket Edition. Each of them has its own unique attack abilities and are natural elements. The best part is that most bosses are summoned with a specific ritual, namely, to killing certain types of mobs. Of course, You can not bother and just use the egg spawn. But the developer believes that a ritual battle with monsters much more fun it will add some atmosphere and unusual experiences.

Fantasy Creatures Battle to replace the four vanilla mobs of Minecraft to battle fantastic creatures. They are all hostile even to each other. If these mobs will intersect, we will immediately begin the battle. Imagine the battle of Goblin, demon warrior, werewolf and a Minotaur. I'd put You?