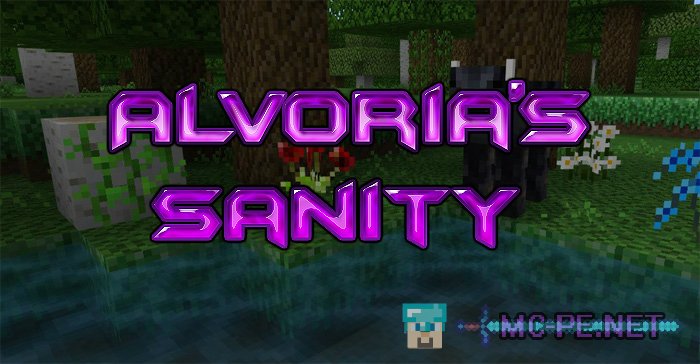 This resurspak will appeal to those who are looking for original textures, but does not like the mixture of styles in one package. The developer has done a great job to the color scheme of the blocks, items, and other things are exactly suited to each other. Thus, all designed in one style and are absolutely unique creation. Presented if you are perfect for medieval constructions and give a special atmosphere playing your favorite game.

How to install Alvoria’s Sanity on Minecraft PE

:
How to install *.mcpack addons

This map includes twenty different Redstone mechanisms. The complexity of the structures are different. Some easy to recreate in his own world, while others have to work hard. Each mechanism is very useful for survival mode in the game. For example, in your home You will be able to build a hidden fireplace or put a huge sorting plant where you can dump all your stuff without worrying about the mess in the chests. There is also the possibility to protect the house by installing a coded lock. You have a high rise building? Then take the time to build a lift for a quick ascent or descent from floor to floor. On this map all the inventions it is very easy to research and study, as shown in detail every detail of the design. If You are a beginner in making Redstone mechanisms, this demonstration is designed specifically for You.

This map introduces an unusual magic weapon that has the same ability as u all known, little ponies. Star bow Twilight Sparkle blows up a group of mobs, and blocks with his space shot. Levitation Rarity allows you to control the creatures nearby and launch them into the air. Pinkie stick from Pinkie pie set fire to nearby mobs, and will impose on You the effect of fire resistance for the safe use of weapons. Magnetic ball Applejack discards all the creatures that you meet on the way, leaving a bright rainbow trail. The sword of light, Rainbow dash strikes all opponents with a powerful lightning strike. Its attack range as much as 20 units. Ice shovel Fluttershy drop into the icy trap any mobs. Download this map and try all in survival mode!

Dopolneniya enriches the game a lot of cool things and goes well with many Addons. What's new: new armor (weapons, tools), new minerals, and all sorts of magical things. To properly begin the study of this addon, I need to activate when you create a world a special bonus chest. It is a subject that allows you to zaspaunit ' villager (soul inhabitant). And that's something that villager and we'll pump. Having a villager, click on it with an iron ingot. Be sure to pick up the pieces that fall out of skeletons, because these particles are the basis. Also, You expect a severe contraction with unusual bosses. Download this amazing addon and you will not regret!

Pixel Perfection is a texture pack with low resolution with incredible high quality parts. All aspects of the texture pack has been completely redesigned to give Minecraft a completely new look. All great for the medieval theme. Creator: XSSheep (original texture pack Java Edition) Ported: HongyiMC