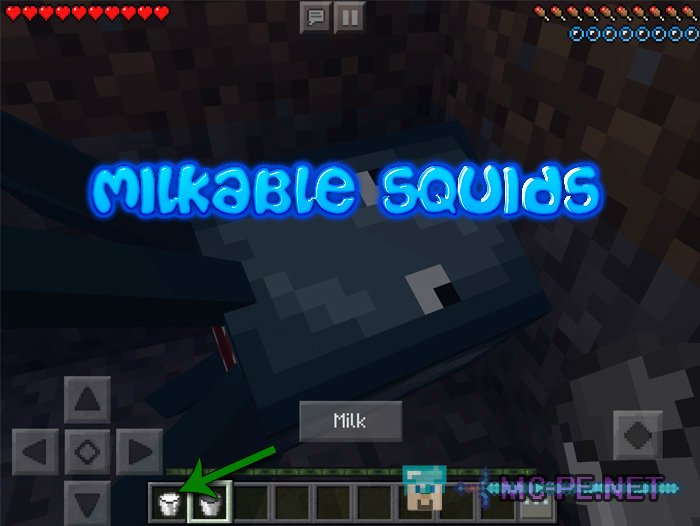 Did You know that squid can give milk? The developer did not know until then, until I checked the Minecraft Wiki. Is in beta version 1.2 Minecraft PC octopus, really like the cow, filled a bucket of milk. Presents addon will restore justice and will introduce this function in the usual squid pocket world Minecraft. Now you do not have everywhere to look for cows to eat milk.

How to install Milkable Squids on Minecraft PE

This addon turns some of the ground mobs in the world of Minecraft in a variety of fish that live in the water. For the first time, ordinary beings remade so that they might dwell under the water. All this became possible thanks to the new function introduced in version 1.1 for Minecraft Pocket Edition. Now you can easily change the behavior of mobs so as soon as you want. And while experience is presented addition, which podlozny the world will become a much livelier and more interesting.

Presents addon adds several features to the usual zombie-horses. Now ordinary horses can become infected by evil and become like them. You have to keep Your Pets in a closed and well protected from the evil creatures of the premises. Presented the Supplement, really interesting, it makes you care not only about themselves. It's a pity that such a function does not provide the official version of our beloved game.

As You know, the latest beta version of Minecraft 1.1.0.9 change the color scheme of stalkerov. Maybe someone of You will be opposed to this innovation, as the old colour may seem much better. Therefore, the designer has created a special set of all the textures of salkera that existed in later versions.

Entity 303 - if that someone was told in the community of Minecraft in order to try to scare other players. People have described being similar to Herobrine, so users claim that the one who spread the rumor is a fired employee of Mojang who just wants to take revenge on the fans of Minecraft. All this is obviously just a fictional story and, in fact, no mysterious mob in the game does not exist. Presents addon will embody the story in reality and impose deterrent Entity 303 in the familiar world of Minecraft Pocket Edition. The monster is quite strong, so You have to be a good weapon to grapple.

Banners officially exist in the PC version of Minecraft. This addon introduces a few such flags in our favorite Minecraft Pocket Edition. Of course, the function of the banners is much more limited, but You can still try out and test all the flags. Perhaps You never had a chance to deal with them, then this is a great way to come and see it.  the resource is just a concept. The developer hopes that in the future the flags will be put into the official build pocket edition.