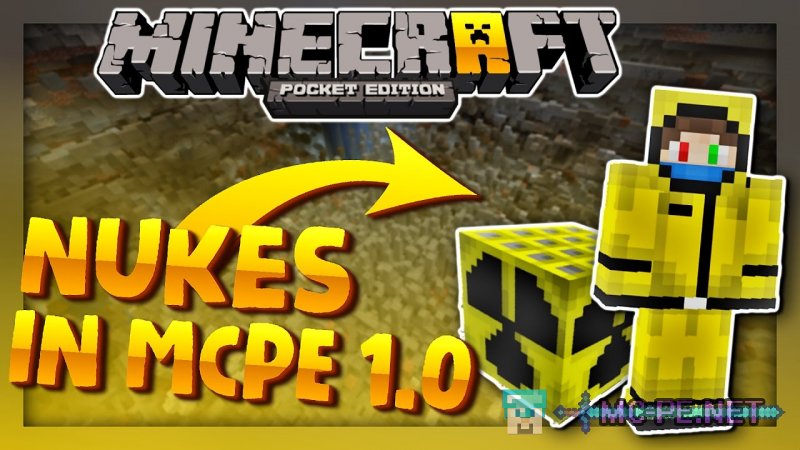 Presents addon will transform normal TNT in destructive nuclear bomb. It is better not to play, but it can be useful if You want to make changes to the landscape or to quickly clear the area. The bomb is not quite similar to real nuclear weapons, but it's still very dangerous, so be careful.

How to install Nuke on Minecraft PE

Here is a very useful addon that introduces a time bomb. Explosives are very similar to normal TNT, but here they include a timer and all sorts of wires. Activate all of the new bomb using the red stone.  Each device has its own timer: 70 seconds, 100 seconds and 140 seconds. Display time on the display changes every 10 seconds, so don't think that the countdown stopped. These improved TNT is not afraid of fire and lava. If You change your mind to detonate a bomb and want it to deactivate, then use the scissors and cut the right wire as in any Thriller. It is actually very simple and requires no long reflection. Off an explosive device, it becomes unsuitable for further use, so it can be safely discarded.

This addition will replace some of the mobs on different types of TNT. In survival mode, these new and dangerous explosive devices can be obtained for TNT and gunpowder at a new village resident named "Demo.". He will find You a large assortment of explosives, which cause all kinds of damage, and create different size craters, for example, TNT x2 (explosion reaches 6 units in diameter), TNT x4 (12), TNT x8 (24), TNT x100 (100), the atomic bomb (200), hydrogen (350), nano bomb (500), neutron star (2000), Napalm (20 fire), singularity (1000), sticky bombs (8), Molotov cocktail (1, fire), garnet (5, fire), rocket launcher (12) missile (8). Sticky bomb can be painted in any color using dyes. To ignite explosive devices, You will need flint and steel. It will take some time before an explosion, so in survival mode you will have to hide as soon as possible, otherwise You will absorb the blast.

Alex's Commands - a really useful mod for Minecraft that allows you to use more than 35 different commands to control the game. First team /nuke, will cause a powerful explosion and may be a little lag you have. command /heal: Max health /clock: shows current time /setspawn: Sets the spawn /sethome [NAME]: set a new home point at your current location /home [NAME]: Teleport to the various home points that you set. /weather [sun/rain/storm/lightning]: install weather. /kill: kill yourself. /cc: clear chat /normal: Reset game speed /fast: speed up the game speed /slowmo: slow motion /xyz: Show current location /feed fill your hunger and much more

Presents addon introduces a new weapon in the familiar world of Minecraft. This is bomb C4, it is much more powerful than the usual TNT. Place the explosives on the ground, light it and stand back at a safe distance, because within 10 seconds it blows up. This device is perfectly useful for the formation of the landscape. The shock wave is so big that You will easily be able to tear down any mountain.

In this side You can find the truly amazing high mountains, which are surrounded by a large ocean. There is no land that connects the mountains, and therefore place can be called a mountainous island. In certain parts of the sid You can find some of the lava flows and waterfalls, and explore the dozens of caves.