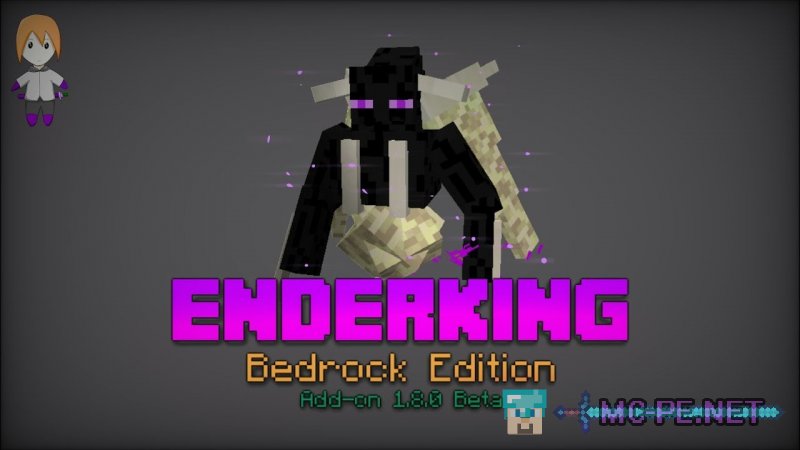 For many years no one knew who ruled Andermani. Presents addon will show and give the opportunity to fight with the real king of all residents of the province. Where do You think lives Underking? Of course, in the Edge, but You also have the opportunity to create it with a spawn egg. This evil king is able to fly and teleport, so against him it is better to use ranged weapons. In the battle with Interkingdom need to be extremely careful, because his movements are extremely fast, but the attack is too powerful, for example, he could release one or two fiery spheres in a row. To anticipate what the monster is going to teleport, follow the particle that emits boss, before disappearing. Underking experiencing weakness to the effects of arrows, such as exhaustion and the poison. After this attack the monster will fall and You will have the chance to grab the crystal Edges. Without this stone Underking lose control and explode. A good battle!

How to install Enderking on Minecraft PE

This addon brings to the game 18 new mobs. Among them are new villagers who can now fight, Yes, Yes, residents will now be able to fight back! Then there are the evil monsters and bosses (which have many different modes of fighting and shooting), and the new inhabitants of the ocean, a new version of the skeleton and zombies – a whole lot of all living creatures. Cave crystals, rotating rotating mount of a gun, which is designed in order to help residents of the besieged village, and even add different types of jellyfish, fish, Dolphin, lionfish, rock biter (Hello from video "Killer of goblins"), teleport zombies, eater of ice, and lots of other things. This addition great variety to the world and make good action in the gameplay.

In real life we fear the uprising of machines and very much worry because of the uprising command blocks! Presents addon brings into play terrible mechanical monster and its minions. The boss replaces the familiar creeper and looks like a animated command block with head, hands and wheels. The monster is extremely tough, and his attacks are very powerful. He also has the ability to teleport and call his assistants. Before you engage in battle with the command boss, make sure that You are well-armed and protected by strong armor. Addition a unique weapon that might slay the monster without much effort. It gives the player special powers, such as incredible strength, speed, high jumping, protection and fire resistance. And the addon adds to the game a lot of mechanical mobs, consisting mainly of the command block. If You think that survival will be easier without the creeper, do not hurry to rejoice, the world will see the pigs kamikaze, each of which is tied to the back of TNT, and they will meet more often than the creeper.

You are tired of the usual bosses of Minecraft. Consider them weak? Want more hardcore? Then, the provided Supplement is created specially for You. It introduces the bloodthirsty creatures, who, together with his flock will terrorize the endless world of Minecraft. Demogorgon is a pretty awesome monster from the popular television show called "Stranger Things". He's incredibly strong and resilient, thanks to 80 hearts and 10 points of damage. The battle with this monster will be very difficult because if You angered one, with him You attack all his buddies. Also Demogorgon has the coolest animation.

Orc is a fictional aggressive fish-like creature that will replace Dolphin. With this monster You definitely do not want to meet face to face, not prepared, not having good weapons and armor, since the power of his attacks reaches 5 hearts. The Orc threat not only in the sea, on the shore must also be always on the alert, because it may suddenly pop up and get to You. Also this fish is not averse to hunt the peaceful villagers. Presents being quite hardy, it has 200 hearts. The developer recommends to fight orkoy in the company of friends in order to make it easier to fill up. As you drop You will be able to obtain 1-7 diamonds. We wish you only successful battles!

This addition adds a special lucky crystal which will appear in random places in your world. You may face with crystals to get a particular  effect. It is impossible to say whether you will get the effect of a nerf or buff. In this sense they are very similar to Lucky Blocks. They are very useful if you're fighting and quickly need a buff. How does it work? "Lucky crystals" popping up everywhere. Every time pigs will spawn, there is a chance that there will be a "Lucky Crystal" instead of a pig. You can also use the egg spawn of pigs to try to get the crystal. Here is a list of different effects you can get with the help of a crystal: speed, acceleration, jumping ability, instantaneous treatment, the increase of hearts, levitation, instant damage, explosions, hunger, poison, slowness Crystals also affect mobs. Because some of the crystals are quite dangerous, sometimes it can be useful to send the mob on crystal