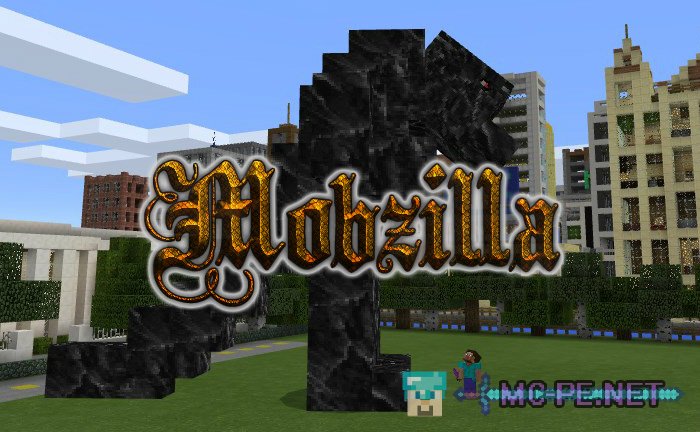 This addon adds Mobzilla (comes from Godzilla) in Minecraft. This is a new boss which You can summon in your world. Is it like the iron Golem. Battle with mobzilla will be an epic challenge for those who will take the risk and attack it. Once You zaspanie this monster, there's no going back, so fight and defeat this threat to the ordinary world.

How to install Mobzilla on Minecraft PE

So they got to the Minecraft – meet the Teletubbies. They spawn as mobs anywhere in the world. Attack the player will not – unless, of course, You will not get to fight first. Falling just a fun loot, and to tame them with cookies or stewed mushrooms.
In this addon there are other characters in the world of Teletubbies, and still have their infected versions – these are aggressive monsters, and loot from them more interesting. With a tink-tank, for example, falls from nine to twenty diamonds!

Orc is a fictional aggressive fish-like creature that will replace Dolphin. With this monster You definitely do not want to meet face to face, not prepared, not having good weapons and armor, since the power of his attacks reaches 5 hearts. The Orc threat not only in the sea, on the shore must also be always on the alert, because it may suddenly pop up and get to You. Also this fish is not averse to hunt the peaceful villagers. Presents being quite hardy, it has 200 hearts. The developer recommends to fight orkoy in the company of friends in order to make it easier to fill up. As you drop You will be able to obtain 1-7 diamonds. We wish you only successful battles!

Herobrine is a well-known creepypastas, which became so popular that some people actually are willing to believe in the existence of this unusual character in our beloved game Minecraft. Saying that someone is very similar to Steve but with white eyes without pupils, appears in their world and begins to build something or *Censored*. Sometimes the Fire may scare, as it appears also quietly and discreetly removed from Your eyes. But don't rush to drop everything to search for this mysterious character, because there was no evidence to support its existence in the game. But with the addition of this if with the ghostly miner will come true in the world of Minecraft. Here Herobrine plays the role of boss and to his cause, You need to build very specific figure. To create one, use four blocks of the soul (replaces iron blocks) and one soul heroes (replaces the pumpkin). As You might guess, iron Golem, thanks to the addon, will be Heropine. This Ghost of the miner is pretty hard to kill, so show all his dexterity. You would think that Herobrine is invincible, but it is not, the only time You can harm him is when it starts blinking... that's when we need to give the full and use all their strength to strike.

The snow Golem turned into a very dangerous snowman called Snowgrunt! To some extent it can be considered a boss because he has a huge level of health. The model and textures of the mob has been completely redesigned. Snow biomes would definitely be much more dangerous with that monster! How does it work? Snowgrunt - a rare snowy substance. But if you don't want to spend a lot of time to find it, you can spawn a snow Golem in creative. Build the structure with the four snow blocks and one pumpkin. The snowman, naturally, hostile to players. He has two different attacks

Godzilla is often mentioned as the “King of monsters”, and it's probably the best name describing the greatness of ancient creatures. Are the dinosaur much more than any usual mob in the world of Minecraft, and its main and most devastating power is the ability to eruption of fireballs. You should also Dodge melee attacks, as they can cause serious damage. Are You ready to come together to fight the worst boss in the history of your favorite games? You'll have to, if you want to stop Godzilla to take over the world.