MC-PE › Seeds › The intersection of 4 rivers

The intersection of 4 rivers 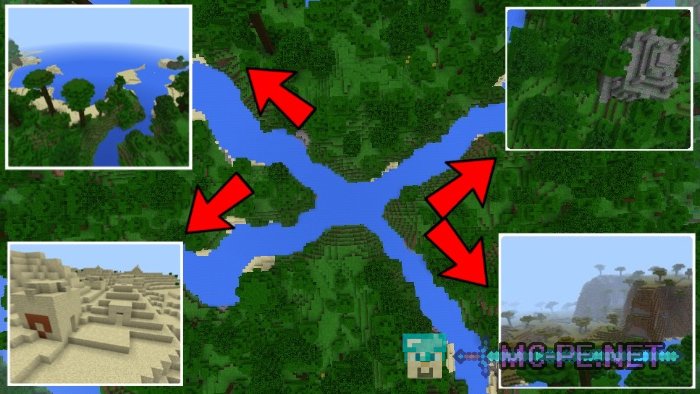 Video review The intersection of 4 rivers MCPE on YouTube

Screenshots The intersection of 4 rivers

In this wonderful side of You to show up right in the jungle. Before You the temple will be located with all sorts of resources and dangerous traps. But that's not the only thing you can find on this map. Near here grows a real bamboo forest (namely, at the coordinates: x = 464, Y = 64, Z = 115), home to the cute pandas. Now you do not have to look long and tedious these little darlings. For use submitted to SIDA You will need version 1.9 of Minecraft and above, because only there are generated such a magnificent forest.

The intersection of five rivers

Are the LEDs really includes a very unique phenomenon. Here You will find yourself at a crossroads as many as five rivers! First, You will find a loop formed by a flow of water in the middle of which is a set of Islands. On one of them and you'll spawn point. If you move clockwise, you will find a second river flowing in a South-westerly direction, and the third is mainly aimed at the West, and the fourth to the mid-West and North-West, and the fifth leads to the North-East, then turns sharply West and empties into a large double lake, which has access to the ocean. Not far from crossing rivers, you can see some of the ravines. The map is suitable both for survival mode and creative, after all, beautiful buildings along with the particular landscape will blend perfectly.

The temple of the jungle on the water

Presented in side You will find yourself in a dense jungle. If you fly in the direction indicated, then after about thirty seconds you will be able to reach the Temple. By the way, he is right on the water. If You can get there in survival mode, breaking the tall hills? In the Temple You expect traps and surprises.

Epic Cliffs in the Jungle

In this side You will appear in the biome of the jungle, covering a distance of 100-150 units. If you walk a little further into the thick forest, you will find lots of epic cliffs and mountain ledges. This is a very difficult kind of terrain, as it is quite difficult to pass, which makes the led very interesting for survival.

Double Temple in the Desert

In this side You can visit the double temple located in the desert biome. This finding will help You for the initial development in the world of Minecraft. Just walk a little further from the spawn and you will see two temples, standing very close to each other. They keep a lot of gold ingots, iron ore and diamonds. This is a good beginning of an adventure.