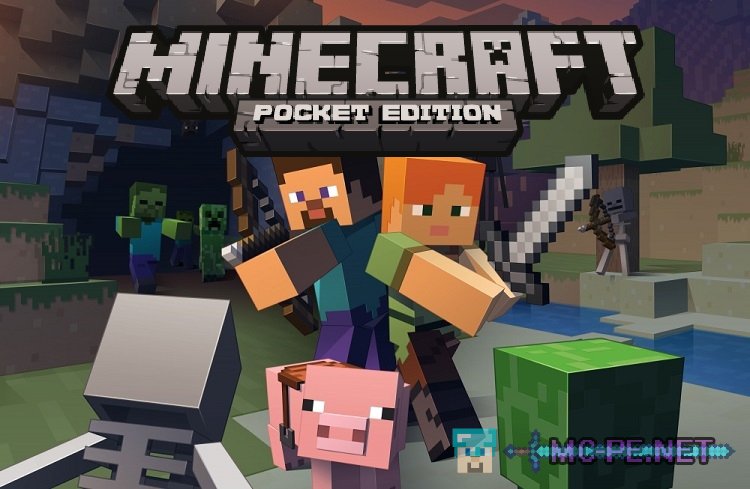 Today 14.03.17 came the next version of Minecraft Pocket Edition 1.0.5.0 where added command blocks that we've all been waiting for. Recall that the command block is a block that allows you to perform complex sequence of commands after receiving a signal of Redstone. Command blocks are an integral part of the most popular maps and mini-games, and this means that PE has reached a new level and became almost on a par with the desktop version of the game.

in Addition, the game added a few commands (/title, /stopsound, /playsound, /clear, /difficulty, /effect, /me, /replaceitem, /spreadplayers, /testfor, /gamerule, /particle) as well as fixed many bugs with past versions of the game

Presented Supplement was rather limited, compared to the original mod "WorldEdit" to Java Edition. The expansion pack introduces 11 new teams, which can more facilitate the construction and development of Your world. For example, using only one activity You will be able to fill a large space or water to create a passage into the mine, so as not to spoil their picks for the descent down. Here is a list of commands that can be used: /clear function-100 - helps to quickly clear the terrain for example forest /function level-100 - units on the contrary fills empty space /function drain - removes water /mine function - creates a passage under the earth, sanctified by torches;  /function mine-rail - creates a railway gliding on 69 blocks down; Commands: /function subway-n /function subway-s, /function subway-e /function subway-w create the current metro with rails on the sides of light (North, South, East or West);  /function fence 10 and fence function-20 - create around the character fence, very useful to catch any mobs.

Already with the beta version of Minecraft 1.8 is the ability to create something new. Not spared by different teams. Let's see what offers us this resource. After applying the addon, You can use the following commands: /function invulnerable - makes You invulnerable /function tools - gives one set of diamond tools /kit function - creates a chest with useful items inside /function over_powered - impose a variety of effects, including strengthening the capacity /function of the strike  on a selected portion causes lightning to fight incessantly. /function clear - clears the player's inventory and all its imposed effects, and removes the eternal storm. If You forget any command, use /function help or /help2 function and displays a list of all available. Presented Supplement is great for survival mode. And You can create your own commands "/function". Just open the package behavior in the folder and you will see many files. Click on one of them and displayed the text. There You will be able to write the command you want using the template. You'll be able to add new files, just make sure that the extension is ".mcfunction" with any name. The file name must match the team, for example, if You specify in the file test, this name will be used /function (Command),  and will look like /function test.

This map shows in practice the amazing features of the command unit. Explore a variety of design, study team and try to reproduce them in their own world. It is possible, based on the idea of the presented mechanisms, You decide to create something of their own. On this map You will learn how to use the bow as a hook for climbing, how to spawn buildings using special eggs and much more.

This map includes four mechanisms that are running by using the command block. To recreate such creations in his own world simply. The Creator shows us different interesting and useful features of the command unit in conjunction with the Redstone that you can take a note.

We had to play a version of Minecraft Pocket Edition 1.0.5.0, as developers have already released another update 1.0.5.3. Of the new: added setting of levitation when you use the command /effect and fixed all the previously reported bugs and errors. The complete list of bug fixes can be found on official website