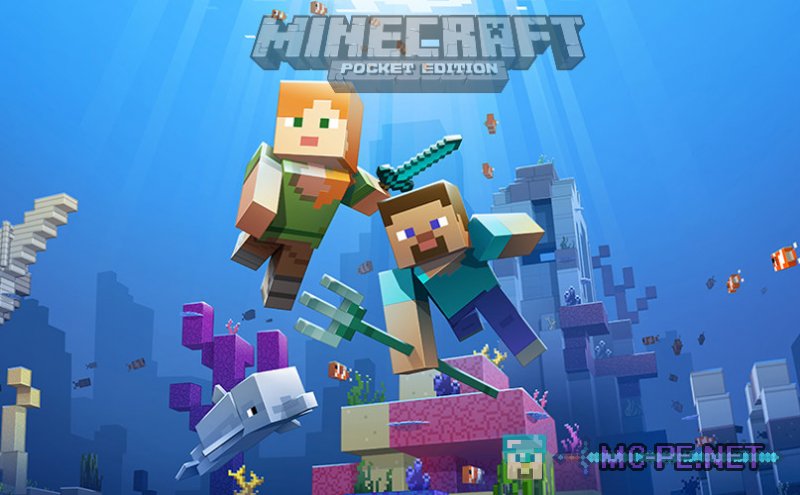 New version 1.6.0 was released on June 16 2018 which, in addition to fix bugs, it added something new and interesting. First added new aerial mob. The so-called phantom mobs that are very similar to stingrays, will now spawn in the night sky, if the player has not slept for three days. Also in the game, new barrier block. This block performs the same function as the invisible unit is not allowing the player to move in any direction except that in creative mode it gets visible structure. Will be quite useful for map makers to limit players to certain areas of the world.

Bored with the usual phantoms? Want more hardcore? Then we present You this Supplement. It enters into our ordinary world of Minecraft new ghosts that live in different biomes. Now You will be able to meet the desert of the phantom, swamp, ice and clay. All of these creatures appear only in their biomes in the dead of night, but You can also use the spawn egg. These new phantoms are also hostile and attack both players and civilians and animals. Every Ghost has its own distinctive characteristic in the form of a unique color.

This Supplement is still under testing. Added two creatures that are designed to protect residents: Magent and Pagent. They can also call in creative mode with the eggs of the call. Magent is a guy with a sword and a Trident. However, it can hold other items. They can also be tamed with boiled cod or salmon – they're a little like wolves. After sleep they can throw its owner some kind of jewel: izumrudik, for example, or Redstone. But the Pagent is the girl that shoots a bow. In General, it is almost like a Magent, just looks more neat and nice. In the future this mod will be special versions of mobs of both sexes - they will become hostile and trudnoporoshkuemye.

This Supplement introduces a host of new mobs into our familiar world of Minecraft. Here you can meet creatures with Addons such as "Better Nether" and "Night ++". In the end it was quite rich resource with 20 monsters, but this is not the limit, because in the future the developer plans to add even more unusual creatures. This is partly all the hellish monsters that will kill Your character. Even, peacefully standing, cactus may prove to be a sinister mob, which immediately attacks You, so now should be very careful walking through the desert. Using the Supplement, You will plunge into a completely different world. Normal monsters and animals will remain. This addon is designed for 1.8 versions and above.

Presents addon introduces a new feathered mob in the familiar world of Minecraft. This time on the endless sky can be found flying eagle. Like a Ghost, he only appears in the night and brings fear and terror to those who are from him is not hidden. Despite its small size, this bird is quite dangerous. Eagle believes players and peaceful beasts their prey, so as soon as someone of the above in sight, the predator will dissolve the claws and will be the victim of the damage, trying to grab her. If You don't want to wait for the night to fight with the feathered mob, create it using spawn eggs or /summon. As this resource does not replace anyone, it can be used only with the 1.8 version of Minecraft.

This addon introduces to the usual Minecraft world of the real phantom. It can be seen at night or you to zaspaunit ' using spawn eggs. Ghost added not in order to scare You and to make You able to fly! Sitting on horseback, with You by some chance manage to tame the phantom and operate it in different directions. The only thing You can't take the UPS and downs, because these functions were not introduced by the developer, but soon, the author promises to correct this misunderstanding. For a flight of this unusual mount should include creative mode, otherwise the Ghost will attack You even when You are on top of it. Got bored in Minecraft surrounded by normal mobs? Then be sure to download presents online and you will not regret!