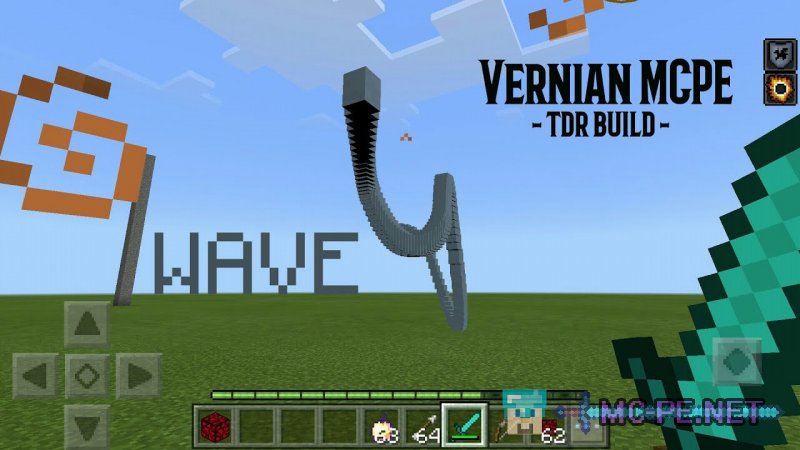 This addon introduces to the usual Minecraft world is a very strange mob called Wave. The creature can cause with a single Redstone mechanism. In case of success in the air will fly something similar to a worm. The creature will fly, creating different patterns in the sky. But be vigilant and not give in to hypnosis, being in survival mode, otherwise the mob without thinking will attack You. Presented Supplement, definitely strange, but it allows you to demonstrate your fighting skills against something foreign.

How to install Wave on Minecraft PE

In this addition the game introduces NPC – NPC. Useful for multiplayer servers helps to beautify a server, brings a special atmosphere in his tone. To call this fellow with the command "/summon npc: wave". It can cause even flying in the sky – nothing wrong with a character is not going to happen. It is possible to rename the labels – we usually do with the help of the anvils. If you wish, you can change the textures of NPC, replacing the picture of his skin in the appropriate folder. these are All elements of design and how You have them set up is Your personal choice.

Presents addon introduces a new feathered mob in the familiar world of Minecraft. This time on the endless sky can be found flying eagle. Like a Ghost, he only appears in the night and brings fear and terror to those who are from him is not hidden. Despite its small size, this bird is quite dangerous. Eagle believes players and peaceful beasts their prey, so as soon as someone of the above in sight, the predator will dissolve the claws and will be the victim of the damage, trying to grab her. If You don't want to wait for the night to fight with the feathered mob, create it using spawn eggs or /summon. As this resource does not replace anyone, it can be used only with the 1.8 version of Minecraft.

This addon is very simple, but quite useful. It increases the drop with the ore, plants, and any mob, and also increases the chances of getting skull skeleton-ischitella. Presented Supplement, definitely makes the survival mode much easier, since for a short period of time can produce a lot of resources for a comfortable existence in a dangerous world of Minecraft.

This addon is suitable for those who wish to test their fighting skills by directing them against a superhero. Supplement enters the familiar world of Minecraft-ant. The developer admits that this is a fairly easy boss, as he is not much resists. I hope in a future update presents superhero will be added unique abilities, and increase strength and endurance.

This addon will make a simple wolf in a new unusual creature - Ender-wolf. Form remained unchanged, and the color scheme changed to black fur and violet eyes. Also, like sulker, wolf Edge will produce the shells of levitation and they attack hostile mobs. Be careful, do not fall under the shot, otherwise a fall can be fatal.