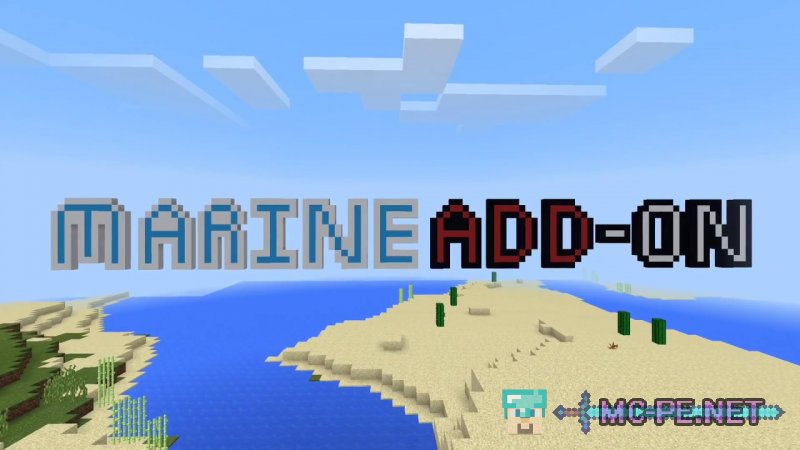 Marine is the first addon that includes a great variety of marine transport. Here You will be able to experience the sailboat, jet ski and boat. Each vehicle is available in three different colors. The control mechanism for all the boats different, but the basic function remains the same. At the moment, the Supplement is not perfect. For example, there is an error in the movement, but this did not prevent You to enjoy the wonderful sea walk.

How to install Marine on Minecraft PE

Quadruple plot – a real find for a fun team! Was the show boat became with the help of this addon the raft. What is the raft from the boat? first, it can accommodate 4 people. To swim with three friends is much more fun, right? second, the raft is safer boats – it can withstand much more damage before falling apart. Third - rafts in some beautiful boats. You can even say something romantic to them. Remember Huckleberry Finn and Jim on the raft. Their RAID on the Mississippi – Golden pages of the classics. You can repeat their wonderful journey. Someone built a raft in childhood on the pond. Indians built rafts in ancient times – long before the era of semi-displacement boats. the Raft is cool and beautiful. for this addon rafts are made in all kinds of wood, and boats. it's Time to set sail!

Here are the map with training function. There is a choice of 12 demonstration buildings. They are all massive and incredibly beautiful. You will not believe it, but every huge building will be able to build with just one command, and to consider in detail the whole process of construction. Now You can create your own castle from scratch in seconds! Or try to build something incredible. Here listed is a whole list of useful commands that operate on this map: /help function - help /function about, /function info /function test /function list /function details/(structure), /function build(structure).

Presented Supplement was rather limited, compared to the original mod "WorldEdit" to Java Edition. The expansion pack introduces 11 new teams, which can more facilitate the construction and development of Your world. For example, using only one activity You will be able to fill a large space or water to create a passage into the mine, so as not to spoil their picks for the descent down. Here is a list of commands that can be used: /clear function-100 - helps to quickly clear the terrain for example forest /function level-100 - units on the contrary fills empty space /function drain - removes water /mine function - creates a passage under the earth, sanctified by torches;  /function mine-rail - creates a railway gliding on 69 blocks down; Commands: /function subway-n /function subway-s, /function subway-e /function subway-w create the current metro with rails on the sides of light (North, South, East or West);  /function fence 10 and fence function-20 - create around the character fence, very useful to catch any mobs.

Presented Supplement replaces the familiar boat on new Minecraft, created on motives of those vessels that were used to transport people to the island and back in the popular movie "Jurassic Park". Though the boat looks huge, as if it can sit a lot of people, but unfortunately, it is not. At the moment each ship accommodates only one person. The control is exactly the same as on a normal boat in Minecraft. This is a great addon if You are tired of the old trough, and You are in search of something new and different, and most importantly functional. Install the add-on together with a map "Jurassic Park" or "Jurassic Minecraft" and You will plunge into the atmosphere of the film with a prehistoric theme.

This addon adds five units of modern transportation: from cars to planes. Auto design remains faithful to the original Minecraft chart, so this makes them a great addition to the game. How does it work? Horses were replaced by four new cars. Driving works the same way as riding horses. Equip the car with a key, so that it can be controlled. iOS/Android: click on a car and hit "Drive/Fly". Windows 10: right-click the mouse on a vehicle to drive.

Minecar: This car is the fastest ground vehicle. You can customize its look with stickers. Use boilers to color stickers.

Minemarine: This car is designed for underwater driving. It can very long stay under water and actually is the perfect vehicle for your travels in the ocean. Driving works like a car.

Mineplane: It's not the fastest or the most technically advanced aircraft and it can fly.

Miniminecar: This is a miniature version of a Minecar. It is much smaller and slower, but it has one advantage - he can jump!

Minebus: this car can accommodate up to five players. Travel with your friends and let everybody ride together in one vehicle.