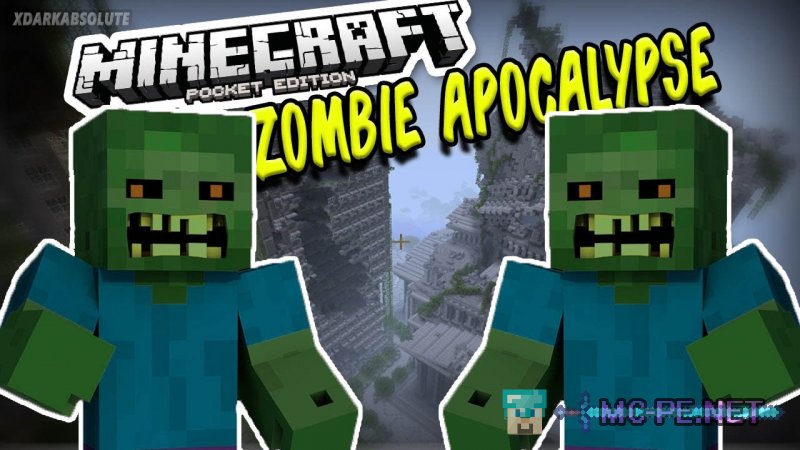 Zombie Apocalypse makes the survival mode much more difficult. Hostile mobs, such as zombies become stronger and faster, and they will no longer act the sun's rays. This means that You may encounter with the dead in any time slot of the day. The players, the people, the animals – no one here is safe. Beware! Zombies everywhere to eat You!

How to install Zombie Apocalypse on Minecraft PE

If You are crazy about sambusak, then submitted the Supplement for You. Surely You bothered to include in their world of Minecraft all kinds of peaceful animals. This addon offers You hardcore breeding zombies. Actually this is a very dangerous and crazy because the dead will not be peaceful, they will attack You at the slightest opportunity. But You will be able to amaze your friends with its unusual hobby. In order to have a baby, lure zombies into the trap and invite them rotten flesh. Unfortunately drowned to propagate will not work. Feel like a mad genius.

Look for ways to complicate your life in survival mode? Then presented Supplement especially for You. It introduces all the zombies ability to flight and shooting fire projectiles! And this evil will no longer fear the sun and fire! This is really something incredible. Float in the air even drowned! Now to hide from the monsters will be almost impossible. I think that they are easy to kill ordinary sword? As it is not so! The addon makes zombies tough. Their health will be equal to 1000 hearts. So to fend off these horrible creatures also unrealistic. The conditions are harsh, and the survival, despite all the trials.

Presented Supplement created based on the cult TV series "Walking dead", which tells about people who survived in the era of zombie Apocalypse. By installing this addon You will be able to know some of the characters from this film. For example, You will meet Walker and Runner, which will appear before You as intimidating hostile mobs. Also, You'll have new weapons to fight this scum. Walker replaces normal zombies, it doesn't burn in the sun. Runner - replaces the cadaver, he immediately jumps on players like spiders. Survivors - will replace the skeletons and will help You in the fight with the walking dead, but it is neutral to players, that is, can fight back, if angry.

This Supplement was created to ensure the best security of the villagers. They don't have to worry about zombies or other enemies can attack them. It is really helpful for your survival worlds if you want to live in the village and to protect the people, to continue to trade with them.

Play this game to improve their archery skills. Equip yourself with a bow and arrow to kill zombies and score points. Then you can spend points in the store to buy new items or upgrade existing ones. It's pretty fun and interesting game, which becomes extremely complicated when you move up in levels. How to play? To begin the mini-game, you need to find your way to the room called "El Jugar" or something like that. Step on the pressure plate to run it and enter a mini-game. There you will find the store. Click the button below to buy a bow and some arrows. You will need XP points to purchase items, so make sure you spend them wisely. To get points and progress in the mini-game, you will need to shoot the zombies in range of the archery. For each kill you get some points that you can spend in the store.