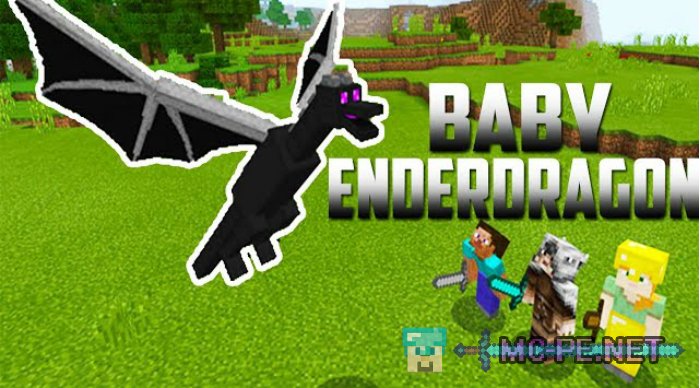 Presented Supplement enters the ordinary world of Minecraft new mobs that we are all very familiar with. Is the Dragons Territory, but rather the children of the very final boss, which flew around the mysterious dimension, bringing terror to every player. To see these flying mobs are quite rare. Their habitat will be a dark cave. There are two types of dragons, some neutral and others hostile to the inhabitants and players. All winged reptiles can shoot powerful spheres of the Region. To distinguish a malevolent dragon from its more relaxed sibling is quite difficult, therefore, exploring dungeons, be extremely careful. After the defeat of the flying mob will drop Gems of the Region and diamonds.

How to install Baby Ender Dragons on Minecraft PE

The Komodo dragon or Komodo dragon - a giant and dangerous lizards. Presents addon introduces these magnificent reptiles in our ordinary world of Minecraft. To find them You can in biome of Savannah or yourself you to zaspaunit ' with eggs. Lizards are neutral, so will not attack players if they are not disturbed. The bite of a Komodo dragon, just like in real life, deadly. Attacking, reptile inflicts powerful damage and applies the effect of poisoning. Leather dragons Komodo replaces the iron ingot and can be used for the manufacture of all kinds of tools and are quite durable armor. Also these beautiful lizards be tamed by offering them any raw meat. As Pets, they will protect You from the monsters and help You in battle. This resource only works for version 1.8 and above.

Presented Supplement introduces a variety of familiar dragons in the Minecraft world. You will have the opportunity to tame these majestic creatures, ride them on horseback or just keep them as a pet and put them into battle with evil monsters. Dragons are very strong and powerful, they can be as wild and frightening and very nice and helpful, if you manage to get along with them. Each of the winged reptiles can be embossed dragon ingot with different elements. But to grow a pet, You will have to buy a dragon egg, sold by the Keeper of the Dragons, which You can find in the village. The egg should be combined with a wedge and wait for approximately eight minutes. After a time You will notice that the shell will crack and the light will be baby. For taming, and further healing always feed him meat. The dragon has three stages of growth, on the third You will be able to fly riding on a dragon, and destroy hostile creatures.

Triceps Gast - boss-mob that first appears in the third episode (Jailhouse Block) Minecraft: Story Mode Season 2. Triceps Gast Gast more than usual and has three different faces. It is dark gray in color and has red eyes. It is naturally hostile to players that are close. Health: 400 hearts. A direct hit causes 18 damage and the fire around.

The amendment introduces children of 17 different mobs. For example, baby creeper, skeleton and even boss ischitella. They will spawn in the world of Minecraft, but you can own to encourage through balls. Also toddlers must be fed (for each particular food) that they grew older, although children mobs look nice and not so frightening.

would Like to be a mother (or father) of dragons and do You have something for this? This idea can realize something lurking deep under the earth. Look at the dragon to tame, and then watch as it grows and then the reptile will become Your most powerful pet that will protect You no matter what danger lies ahead. The only thing You will not be able to fly on dragons, but they are still one of the most epic and powerful mobs in Minecraft Pocket Edition.