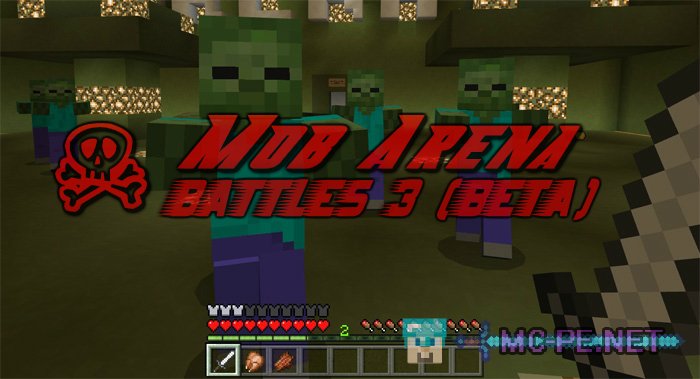 How to install Mob Arena Battles 3 (Beta) on Minecraft PE

Here are the map with open Pvp arena in which players fall out of the stump, standing on three legs. When the player steps on the field of battle, he gets a certain number of points that can be redeemed for all sorts of improvements and useful items. Also for points, You will be able to get a very beneficial effects, lasting from one minute to two. At this point You will be able to get such advantages as: "Deathmatch" - no player can leave the arena or log into it and "KOTH" - if You will be in the center of the circle, will receive two points per second, plus two points for each killed opponent. In the lobby there is a spectator room where you can enjoy the battles, being in complete safety.

SG Zombies is a mini-game PVE, you can play both alone and with friends. The main goal is to survive all the waves, killing monsters and unlock all levels. If you are looking for ways to improve my own fighting skills, then SG Zombies is a great option because it offers both fun and intense gameplay. How to play? Kill zombies to get points (experience points) and use them to purchase new items and items. Waves of zombies will appear so often, so you always need to make sure that you set up and ready to fight monsters. There are several doors that will unlock the next level once you reach a certain number of experience points. The first gate (which does not coincide with what is seen on the screenshot) rasplachivatsya for 750 experience points.

Japanese Garden Arena is an amazing place to battle with your friends to find out who is the best Pvp fighter. Arena implies a battle 1 on 1, but you can create a match between two teams. The design of the entire creation is based on Asian architecture. The developer with the nickname Luma first to use this style to create a Pvp arena. Overall, it came out very nice. Perhaps the map will appeal to fans of Japanese culture.