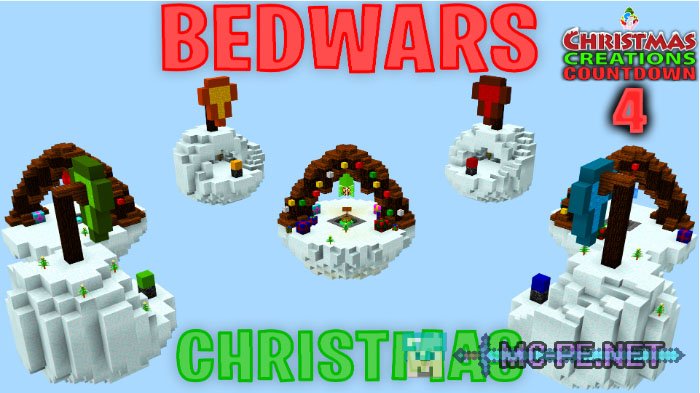 Before You fully automated mini-game "Bed Wars", in which can engage a large number of players. Here are one big arena called "Snow island." It includes a small store where You can exchange your gathered resources into other useful things. Difficulties should not be, because the user interface is very easy to use. Call your friends and start fighting with each other. Use a stone shovel, which is given to each participant at the beginning of the game is to knock down the bed of the enemy and deprive them of their spawn point. Don't forget to put on the armor of his color to see what You group, because you can accidentally hit his ally.

How to install SG BedWars XMas on Minecraft PE

Team battle on a snowy field - what could be better! Here You run the risk of freezing, if not defeat all the enemies and do not provide for themselves and their team warm clothes! Call your friends in the multiplayer mode, divide into groups and make a spectacular winter battle. Someone from Your team needs to be the last survivor and win! Quickly gather their resources from chests to have the advantage in the fight.

Before You map a floating Pvp arena made Christmas decorations to create a festive atmosphere and give a cheerful mood. It consists of four Islands that are connected by bridges. Click on the portal to start the game. Before the fight You are given the opportunity to choose from five whales, which includes everything you need for battle and survival. Call your friends in multiplayer mode and start an incredible battle. Use your ability to knock opponents into the abyss. Party, remaining all alone in the arena wins!

Here is a new arena for Pvp battles and potolochek. Location created in the style of a huge floating island with a volcano, which if destroyed this flourishing klochochek land, turning it into a lifeless stone. To play this map requires several players, so rather call friends and arrange fights among themselves. To start the battle, press the special button, located in the lobby. Try to push all opponents out of the arena and stay alone on the island.

Egg War is a very interesting multiplayer map. The primary objective is to protect the sacred eggs from the attacking team. To play You need the other players so You can get together with them in a bloody PVP battle. The map of this size is quite convenient to fight even eight.
How to play?
Immediately after entering the game, we get more instructions. Map Pitsea, so the game should be at least two players. Once all players have joined the world, are divided into two teams – red versus blue, blue versus red, and begin to play.
On Your base are interesting and useful things. For example, there are "bars fountains" that will continuously produce ingots.
These ingots can be sold in the store, instead of having blocks and items. The sale also features items and blocks that can be obtained in exchange for gold bullion. However, these gold bars can only be obtained at the Central island.
the Main purpose of cards is to defend the sacred egg of Your team. But we can't just stay in the camp near the eggs and guard it. Because for your own victory You need to destroy the egg of another team.
Important: this map is for 1.1.0.9 beta.

TNT Wars is a multiplayer mini-game where the main task is to build cannons and shoot the TNT blocks. To win You must either kill all members of opposing team or destroy their base and bring down the celestial island. It's a pretty time consuming task, but nevertheless very funny!