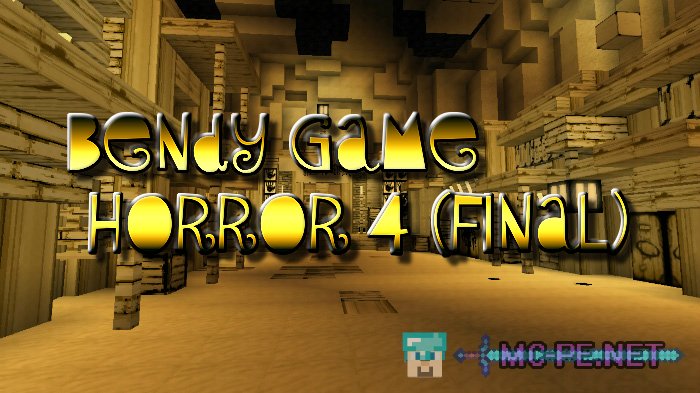 Here are the fourth and last card from the game series "Game Bendy *Censored*". You Wake up and realize that you are in prison. Razumkov eyes wider, You see outside there are two people, and I understand that this is what they locked You in jail, so they decided that You are too dangerous for them. To stay in the prison You had a chance to be forever. But at one point when You finally discovered that You just left to die, You started to act in order to escape from this trap. A little thought, You mentally built in my head an escape plan, but unfortunately, not until the end, as it is difficult to understand in which direction to go to. Help your character to find a way out of this ill-fated place with lots of monsters and creepy atmosphere. Beware of the chief demon always watching You.

How to install Bendy Game Horror 4 (FINAL) on Minecraft PE

And-and-and... it's not the next part of The Elder Scrolls (oddly enough), because we begin your way on this map just as a prisoner. More specifically, this game was inspired by the popular The Escapist. So, the plot: You find yourself behind bars after a failed attempt of a robbery of the National Bank of Minecraft. Something went wrong, and eventually officers placed the Player in jail, where there is despondency and a strict regime. Our task is to open a path to freedom and to leave the stifling walls of the big house. You can communicate with other prisoners, to perform small tasks, to trade, to fight, solve puzzles to finally find a path to freedom. Forward to fresh air!

You were arrested for a crime and imprisoned for life. There were rumors that this prison no one could escape. On hearing this, You are scared and still decided to try to plan an escape plan, as it is not going to just give up and sit in place. You have a brilliant idea, but its implementation will need to pass a set of puzzles. In the beginning of the game, read the rules, use the command "/functions relating to the map" or in the book. The stone can destroy the stone picks, and hardened clay painted gold. You can place levers on emerald blocks and dynamite on quartz blocks. Still You manage to break the glass using a glass cutter. Other features You will learn about during gameplay. Be careful if Your character is caught, he will remain in prison forever.

This map is incredibly eerie atmosphere is the third part of "Game Bendy *Censored*". This time You must try to rescue his dear friend from the kidnapper. But it will not be easy, because in the way You expect a lot of obstacles, for example, the battle with the main boss. Reading all kinds of signs, as well as tracking accompanying the texts in the chat, You will be able to move forward on the storyline, which will lead You to the denouement. Immerse yourself in the horror story with the map.

This map will send You on a spooky adventure full of mysteries and riddles. It all started with the fact that You received a letter from a friend in which he writes about his desire to meet with You and determine the place of meeting in an old store. When You arrived and looked around, found nothing except eerie silence and smeared ink on the floor and walls. The atmosphere really is mysterious and terrifying, but You did not retreat, but rather began to investigate to find his best friend and to understand what happened while You were in the way.

This adventure map was created based on the popular horror game called Bendy with ink. Your goal is to find 12 different items and bring them to his old friend. All this happens in a rather creepy place with several different characters that you will encounter when moving on the map. Also, don't forget that this is a horror map!