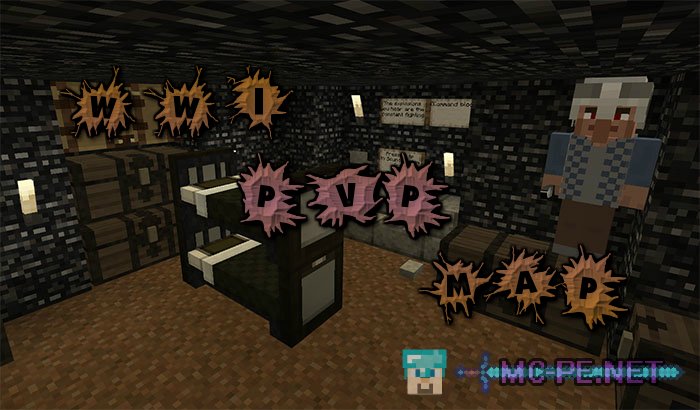 Presents a map created in military issues. It includes a pretty big arena (100x100 blocks) where possible to conduct large-scale battles. It has everything for conducting the real war, the various craters, trenches, shelters, places to sleep, and even puddles from which to extract water. Surrounded by desert and the dead trees add to the disturbing atmosphere. Invite your friends in multiplayer mode break into groups and declare the command war among themselves. And now let won the most clever, in the end conquers all the same, the friendship: a strong team of Champions. This map uses a lot of extras like: "BMWar", "Villager Guardards" and texture pack "16 Craft".

How to install WWI PVP Map on Minecraft PE

Here are a Redstone mechanism using command blocks, the purpose of which is to create new recipes in their world of Minecraft. The process of manufacture is very similar to vanilla version, the only big role to play is Your imagination. Now You will be able to find a use previously not very useful, the eyes of spiders and other rubbish, discarded You in the chests. Change the recipes so that You can create even diamonds. Also use the machine as antivertigo, for example, for turning the plates back into the blocks or books tucked into the skin and sheets of paper. Just put the extractor on the ground face up and place it on the recipe. Then stand on top of the ejector to create the object. Open the access panel on the side and change the recipe for their own needs. Create the objects and resources from fictional recipes You will be able around the world of Minecraft! Download and play survival mode with your friends and think about new crafts together.

This addon replaces some items, blocks and mobs to the game on things related to Christmas. This is really useful if you want to feel the spirit of Christmas and the New year. You will be able to decorate their homes with Christmas trees, gifts and various ornaments. And if you're lucky, you'll even find Santa! Christmas trees, gingerbread, Santa, gifts, and reindeer are some of the new things. Chalker replaced by a Christmas tree. Use dyes to paint your tree in another color.

"Thimble" is a really fun multiplayer mini-game where players take turns jumping from high buildings and trying to safely fall into the water, while placing the block. Over time the pool will become increasingly smaller, and the players end up accidentally fall on the blocks and will die. This is a really interesting mini-game and something like a dropper. The game will continue until, until all players but one drops on the block and not die. Make sure you break the blocks before the start of a new game.

Two desert temples and a village

In this side You will appear about two desert Temples and not far from the village, located in the biome of the Savannah. The map is very good to start a new adventure in the world of Minecraft, as for small amount of time You will be able to get quite a lot of useful resources. In total You can find 34 gold bars, 5 emeralds, 4 diamond and more.