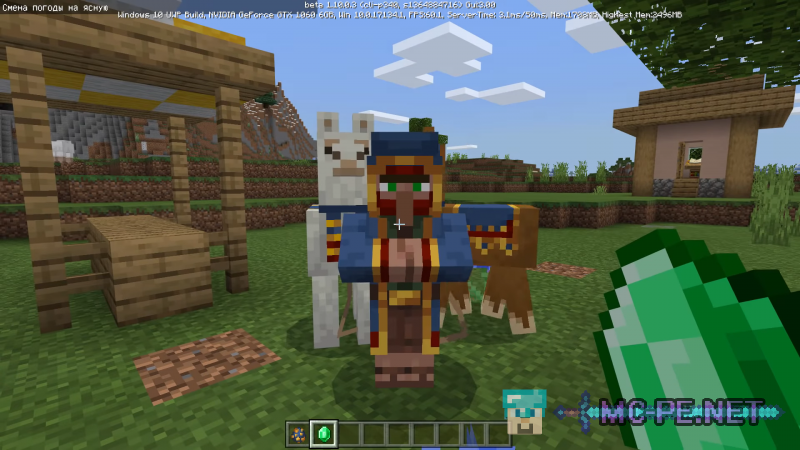 Many players previously noticed that the game was added a lot, but not involved in the gameplay. With the release of version 1.10 beta most features are available! Changes have been made to almost all starting blocks and ending with the generation of the game world and the behavior of mobs.

first and foremost have added some interesting mobs: wandering trader - a mob that travels between villages. He spawn in the village for 2-3 days and can offer unusual items that are not typical of the current biome; the beast - the mob, who will occasionally attack the villagers. In addition, the game will appear on Fox and the new colors of cats.

was improved AI for the villagers. Now they have become smarter and for example in the form of rain, will hide in houses and under sheds. And if you trade with them you will see they have a item you want to buy.

With a complete list of all changes can be found under the spoiler below.

The new version of the game Minecraft 1.11.0.7 the creators have modified the behaviour of villagers during a RAID. As soon as people hear the sound of the bell that signals the beginning of the RAID — they tend to hide in their homes.

New auto-sync feature of your current skin from the set between multiple devices
Having a  effect the hero of the Village you will get discounts on products from residents of
Drop the marauders
During the start of the RAID his horn will be heard by all players in the current world.
Display accessibility features (text to speech for the chat Enable UI Screen Reader)

to Change the generation algorithm, which will affect the older seeders some objects can change their location
a travelling Salesman is now ready to trade with you without the experimental treatment
Updated titles of occupations of residents
Updated zombie residents
Improved search paths villagers and iron Golems
New bar experience in the trade with the residents
Residents will now replenish their goods immediately upon arrival to the place of work
Residents flee damama during raids and trade becomes available.
Itinerant Traders do not make up their products and would "disappear" after the sale of all goods
Cards can be blocked with glass panels on the Desk of the cartographer
- Blocked cards are not updated to reflect the studied areas or changes in the world
- Uncharted areas remain unexplored.
- Locked maps can't be expanded, but can be copied

This Supplement introduces a host of new mobs into our familiar world of Minecraft. Here you can meet creatures with Addons such as "Better Nether" and "Night ++". In the end it was quite rich resource with 20 monsters, but this is not the limit, because in the future the developer plans to add even more unusual creatures. This is partly all the hellish monsters that will kill Your character. Even, peacefully standing, cactus may prove to be a sinister mob, which immediately attacks You, so now should be very careful walking through the desert. Using the Supplement, You will plunge into a completely different world. Normal monsters and animals will remain. This addon is designed for 1.8 versions and above.

During the event Maynkon, it was announced a new update called the Village & Pillage. After being introduced, one of the innovations will be the appearance of several new mobs. For example, pillagers Bulls (also known as Animals) - wild and dangerous creatures, who attack without sparing residents with their powerful attacks. And Pilate is a hard - core robbers, shot the peaceful population of Minecraft with his arrows. To protect the villages, the developers decided to equip the character with a crossbow, which deals much more damage than usual bow. This addon will allow You to go ahead and try all these new products first. However, keep in mind that the Supplement is a copy, created by video and photo materials Mincone, so You will not find here anything official!

This Supplement was created to ensure the best security of the villagers. They don't have to worry about zombies or other enemies can attack them. It is really helpful for your survival worlds if you want to live in the village and to protect the people, to continue to trade with them.