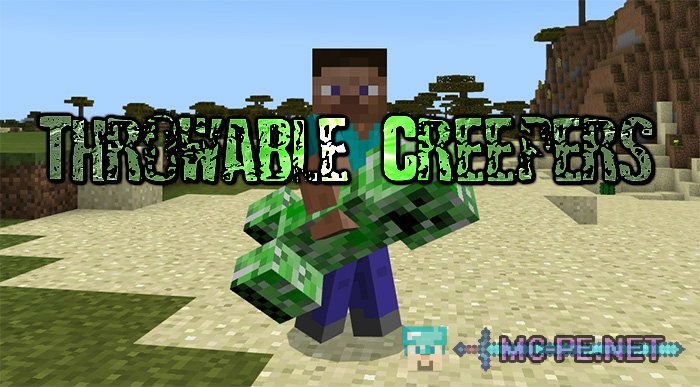 Before You cool add-on that replaces the tridents, turning them into a creeper. Yes, now You have a chance to get even with these green monsters with their own weapons. Use this manual creeper as well as the Trident, so any difficulties You should arise. The only thing You have to be careful is with the explosion. After You throw a monster when you touch the ground it detonates and will damage anyone who is nearby. Install presents add-on and show everyone how cool You are a conqueror of the creeper!

How to install Throwable Creepers on Minecraft PE

You probably agree that the familiar underwater world of Minecraft is rather scarce. Submitted addition will make it much more interesting. Here You will meet about ten new mobs, such as killer whales and sharks, Megalodon and others. Also there are live mermaids and a majestic Triton. The water can move around on the raft. The addon is attached the gear and weapons to Your underwater adventures was more convenient and safer. Rather, dive and explore the depths of the ocean with this unique resource. Fight bosses and other hostile aquatic animals to survive.

This addon adds in the familiar world of Minecraft new mini-boss known as the Creeper-mutant. This is a much more powerful version of a creeper, a slightly different appearance from the usual. Presents creature walks on four paws and arching its long neck. Monster hostile to players. He can either blow up the victim, or to send upon her the crowd of angry young will caperet.

This addition gives the creeper a pretty awesome view, and also supplies him with new abilities. One of the skills include the ability to emit charges of fire, piercing of the player and causing a substantially large explosion. At first glance, Mega Creeper seems pretty funny, so you should not miss the opportunity to laugh at the creature. (It will not blow Your house down...)